You are here: Home / Uncategorized / Preoccupied: In Which I Occupy Wall Street

Let’s face it. I’m preoccupied. My life is full of the every day chores, tasks, joys and frustrations that come with being a parent, managing a household and working at a job. I don’t have a lot of time to think big thoughts, let alone protest the many injustices in the world. Like many in my cohort, public participation in any kind of political action is low on my priority list. But yesterday I found time to drop by Occupy Wall Street to check out the protests for myself.  I went for three reasons:

I got off the subway at Cortlandt Street, and saw the first sign that this was an apt tribute to my grandmother, who was a lifelong activist, but also a bargain shopper: Century 21, the mainstay NYC discount department store where we would often meet to debate important topics in fashion, like should she get this thirty-dollar bathing suit, it seems expensive.

Cortlandt Street is also the subway stop for Ground Zero/ Freedom Tower, another apt reminder of grandma, who had one of the best views of the Twin Towers in the city. (As it happened, we were together in her apartment, along with my children ages 3 months and 3 years old, on the morning of 9/11 and watched the attacks from her windows, until we too, were engulfed in smoke.)

I continued one block east to Zucotti Park, where I literally walked into a parade of anti-Wal-Mart protestors circling the park. The scene was peaceful.  There was a heavy police presence, but the officers were managing traffic flow more than anything and actually being quite helpful.  (When I attended my first protest without my parents around age 17 or 18, my dad gave me this simple advice, “If you have any problems, don’t ask the police for help.  They have guns and they want to use them.”) 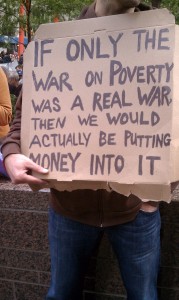 The park is small and tightly packed with protestors, onlookers and camera crews.  It’s a little smelly and dirty because, in all honesty, quite a few of the protestors could use a shower and a change of clothes. There are lots of sleeping bags laid out around the park, many with people sleeping in them, even at 2 in the afternoon.  There are some tables set up with different kinds of information, but oftentimes no one manning the tables. Overall, the feel of the place is pretty disorganized.  Like a cross between a homeless encampment and the parking lot of a music festival.

The protest activity ranged from a no-nukes group protesting the Indian Point nuclear power plant to a dad who’s son’s life has been devastated by depression to (my favorite) the guy carrying a sign that read “If only the war on poverty were a real war, then we would actually be putting money into it.”

The other activity happening at the park included hanging out, screenprinting t-shirts, taking pictures, playing music, doing interviews and, very importantly, raising cash. I didn’t donate to the guy whose drums were stolen from the park.  I did donate $5 for food for the protestors and was given a “Make Out Not War” sticker in exchange. 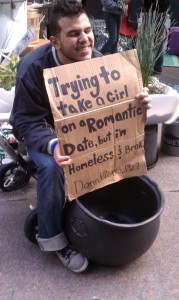 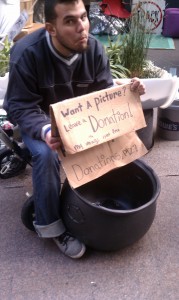 I also spent $20 on a “Free the Wage Slaves” t-shirt for my dad.  I couldn’t say no to the charming young man who  was selling them.  And with every purchase, a free DVD of him skateboarding. (Perfect gift for my 16-year-old stepson). I laughed at the enterprising honesty of the fellow whose sign read ” Trying to Take a Girl on a Romantic Date But Homeless & Broke.” I had to give him a buck to take his picture, so I hope you enjoy it!

I have  five takeaways that I feel it is important to share and I will expand on each of them in separate posts over the next few days:

“In the United States, the right to become rich has become collapsed with the very notion of liberty. From the time we are children, Americans learn to confuse democracy (a system of decisionmaking and governance), with capitalism (a system for regulating and releasing money flows.”

I promise to to expand some of these thoughts in future posts.  I had very little time today to write, but wanted to make sure I got my initial thoughts down. 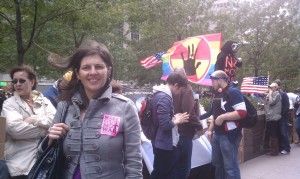 In the meantime, I’ll say this: I wish the protestors would take a shower, put on some clean clothes and find a way to start “mainstreaming” the Occupation.  I did feel a little sheepish getting off the train in Greenwich last night wearing my Make Out Not War sticker.

Protests are fun. They bring people together. They create a kind of energy and sense of purpose. But figuring out a pragmatic and realistic course of action is the hard part and it will take both the Occupiers of Wall Street and the Pre-Occupied of the suburbs to make something meaningful happen.