You are here: Home / Archives for All About My Father

My mother always hoped that someday I’d catch religion, but I guess she died disappointed in that respect. She hoped that as I aged, or I became really old, I would somehow catch the religious thing, but alas. . . I had a fairly bad start at religion anyway, being first exposed to Orthodox Judaism and then Roman Catholicism, with an interleaving of Nazi anti-Semitism at a very early age. And it isn’t as if my mother was a really religious person. She went to the temple two or three times a year, abstained from pork, and that was it. But my Uncle Nuhim, he was different. Judaism, going to the temple Friday evenings and Saturday mornings was an important part of his life, although Aunt Paula had to stay

When I wasn’t in kindergarten or at home, I was at my Aunt Paula’s, who with her husband, my Uncle Nuhim, and their daughter, Lily, lived in an apartment over Emil and Nora’s coal store. The apartment consisted of three rooms, only one of which had electricity. Central heating might have come to the rest of the world, but in our part of the world, each apartment still had its own stove and needed coal for heating and cooking. Besides being the landlord, Nora and Emil sold coal. No one was quite sure whether they were Nazi sympathizers or not, and they probably weren’t, but still there was that whiff of suspicion. The store was on the first floor, and the apartment was on the second, and was accessible only from a usually locked front door and a flight of stairs. Only the main room, fronting the street had electricity. It also had

The Jewish kindergarten my cousins and I attended (before they were all closed by “the authorities”) was within walking distance of my Aunt Paula’s house, and I loved the walk from her house to school, although I must confess to considerable dithering along the way. I have a photograph, taken at the time, of the school’s children and their mothers (as well as some of the school staff), but I have no recollections of exactly what it was I did there. Probably I did the same kind of things that children have always done in kindergarten such as singing, lots of running around and lots of character improving arts and crafts. I just don’t remember.

Whatever it was we, the other children and I, must have enjoyed it because when our nap time came, we hated taking the naps. Possibly children have always hated naps. However, my attitude to naps was somewhat different. I thought that if the adults wanted

A few years ago on my 40th birthday, I had this conversation with my dad. I was so struck by my dad’s responses that I transcribed it word for word:

JB: Was your mother ever happy?

AL: Yes, she was very lively and happy, but she had a very hard life and that toughened her to the world.

JB: Do you remember a time when she was happy?

Life in the new apartment became normal, to the extent that life under the Nazis was ever normal. However, as I had really known no other way of living because earlier I had been too young to be conscious of it, this was normal for me. The adults disappeared from the apartment for much of the day and reappeared in the evening. I had no idea what they were doing, whether they were working, looking for work, or just spending the day playing cards in some café, which some of them probably did, as card playing was one of the ways of making money, and my mother was particularly talented at rummy. Actually, I didn’t care, as long as 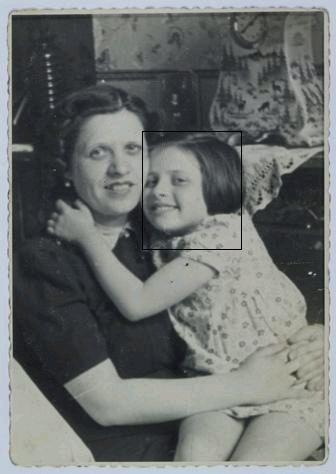 he people with whom we now shared the apartment were an interesting lot. Naturally, there was Ferdi, as well as his best friend, Max Fingerhut and his nephew Norbert. There were also a few others whose names and faces I’ve completely forgotten.

The reason I remember Norbert is that he was a boy my own age who became a good friend, especially while we lived in hiding in the “couvent.”

And of course, there were Fella Flamberg and her mother, Bertha, my mother’s best friend during the war years. Bertha was not really her first name, but it served. Fella and her mother had been passengers on the St. Louis. For those who don’t know, the

Moving was made necessary by Kornberg’s deportation. He no longer owned anything, and the new owners, whoever they were (either the government or the Nazis, which was more or less the same thing), didn’t want us. So, my mother, clutching a suitcase, with me in tow, began searching the city, looking for a place to live.

It seems it was a common problem for Jews at that time, as we were soon joined by several other families in need of a home. We made a small group of about eight to ten people as we went from apartment to apartment large enough to provide shelter for us all, as money was also a problem.

Of course, I have no memories of living in Berlin, having been only two years old when we left, although years later when I visited Germany, it felt amazingly comfortable, somewhat like putting on a well-loved pair of slippers. But the only thing I really remember about the city was being driven around in my fathers cab and being allowed to use the directionals, red circles on sticks which had to be stuck out the side windows. I think I was responsible for right turns. That is all I remember of Berlin.

Brussels, however, was a different story. As mentioned earlier, for a while, at the beginning of the war, we lived over Kornberg’s store, and I think I really liked it, not only because of all the cats, but particularly because on the top floor lived a wonderful lady named Frau Shtoy. I have no idea of how old she was or anything else about her. What I remember is that she had well-coiffed grey hair, her make-up always on just so, and was always well dressed , usually in grey business suits, but that could have been the result of 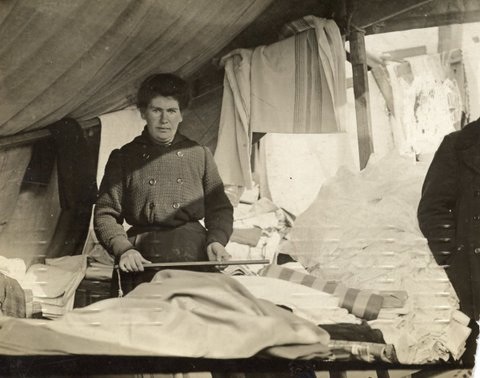 I never knew either of my maternal grandparents. My grandmother, Helene Polajawer died in 1919 of the Spanish Flu, nine years after giving birth to my mother, whose name, incidentally, was Gerda. I have a nice photo of my grandmother at her dry goods stand at a Berlin market, probably on Alexander Platz. My grandfather died on March 6th, 1935, in Berlin, of natural causes. He lived to be 85 years old, and my grandmother was the last of his three wives. The reason I remember the date of his death so easily is that he died exactly a year and a day before I was born. Hitler had already been in power two year when he died, and it may have been a good thing that he died when he did. He wouldn’t have survived under Hitler in any case. In 1941, 10% of Berlin’s Jews committed suicide in order to avoid deportation, and they may have been wise to do so.

After my grandmother had died, my mother was raised by one of her sisters, a not uncommon happening in those days. My grandfather’s name was Abraham Schocken. I believe he had eight children, but I only knew three of them. I have no idea

I have absolutely no memory of what happened in the next two years, with only occasional recall of particular incidents after that. I remember a small apartment over a butcher shop run by a man named Kornberg. I liked going down to his store to watch him make sausage. I also liked the several cats that wandered about the place. The combination of meat and cats was a good one.

I also remember a terrible fight between my parents, caused by I know not what, but it had been terribly hot that night, and somehow balloons attached to my crib burst. Don’t know if that had anything to do with the fight between my parents, but I clearly remember my father hitting my mother, and her head striking a delft-like, white and blue ceramic