Anyone can show up in Zuccotti Park with a placard and a gripe and occupy. No one will dictate one message or another about this movement. Your health problems and the operation of a nuclear power plant and student loan debt are all reasons to feel aggrieved and OWS tells us to get that anger out there. Which is great. It’s great for catharsis and ultimately, all these grievances are in some way byproducts of a system that is broken.

But I have to wonder whether the mass kvetch is more harmful to the cause than it is helpful.

My three main concerns are as follows:

In America, a stunning lack of empathy has become the norm. Herman Cain has openly articulated a message that underlies a lot of political and corporate subtext today: “If you’re not rich, that’s your fault.”

There’s a myth in this country that anyone can pull him or herself up by her bootstraps and be a financial success. Likewise, there’s a myth that anyone who is down on their luck simply isn’t trying hard enough.

I understand the protestors with personal sob stories. Any of us could have them. Because we live in a system — economic, social, cultural and interpersonal — where safety nets are largely there only if you make them yourself.

The problem with sob stories is they invite people who have not experienced basic human hardship, the kind of hardship that is often a matter of luck (and nothing else), to compare their good fortune to your bad fortune and explain that you should be like them. 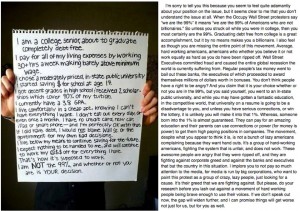 The left is a picture circulating on Facebook; the right is a response written by an OWS supporter

I saw this most recently in a shared Facebook photo I re-share here, along with an OWS sympathizer’s response. If you don’t want to read the whole thing, let me summarize: “Buck up, live below your means and get over yourselves. I did and you can too.”

It’s the kind of self-righteous message we have all become so accustomed to hearing in America — on the news, in movies and popular culture, in the halls of the corporations I have worked for, in self-help books and, of course, on the lips of politicians.

Let me be clear. I am a “have.” I am very lucky to live in a nice house in a fancy neighborhood, to have the luxury of working for myself and the flexibility that brings with it. (I also have the comfort and security of a husband who is incredibly helpful and also has a regular job and regular health insurance.)

But I could just as easily be a “have not.” In 2008, I was a single mom with a child newly diagnosed with autism when I lost my “regular” job in corporate America. I was LUCKY because I had a well-established professional network, a warm, supportive and generous personal network that included my parents, my siblings, cousins, neighbors and lifelong friends. They ALL helped me during lean times.

I had always lived below my means, I carried no student loan or credit card debt. And when I started out in my life as an adult, I never planned to be a single mother, I never hoped that I would have a child with special needs, and I never, ever wanted to lose my job. What can I say? Shit happens.

There is no question that in this country today there is a crisis of empathy. I think the sob stories give a personal perspective, but I think they also invite divisiveness.

I don’t know how we bring empathy back to civic life in America. I do know that the most common trait of people with autism is the inability to feel empathy. Is it possible that our society has become autistic?